Our visit to Struga, Macedonia, an inspiration and a lesson

Read as well: the nature of our freedom

This article has been written in English as it will be read in an international community. I thank the students and Angela Velkova, director of the Preparing Global Leaders Institute, for their approval publishing this article.

This year we flew to Macedonia. It was a kind of "now or never". Our target was the lake, the Lake of Ohrid. The scientifically proven deepest part of the lake is 288 meters, deep enough for hiding a mysterious life underneath to the world above… 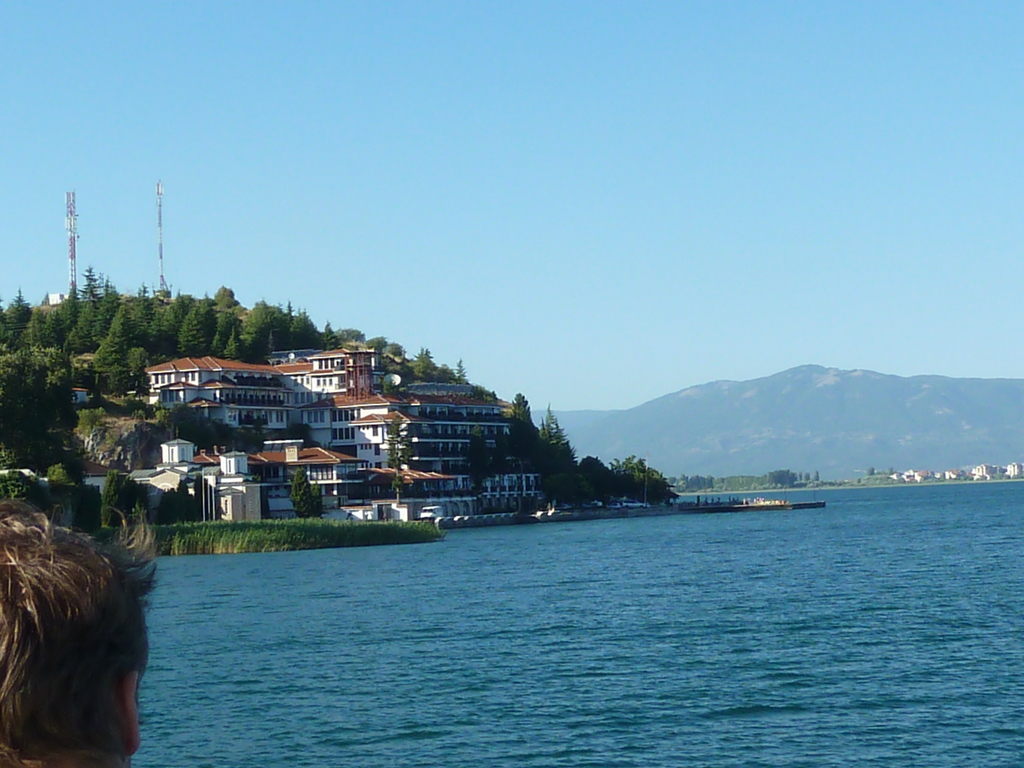 The lake – a wonderful magnet for tourists We choose for Macedonia also because of the promise we could relax very well in this country. That appeared to be very true in multiple senses. I will explain this.

We, my wife and I, enjoyed our stay in Struga very much. I show you some of our impressions: 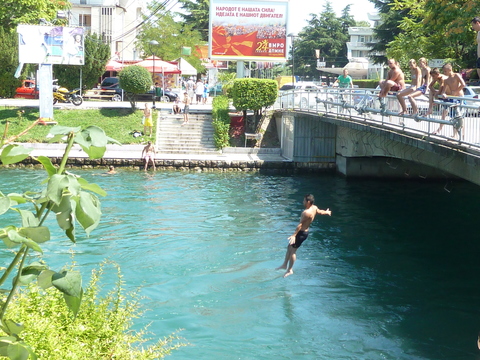 Jumping into the “Black Drim”. It was relaxing to watch these guys. 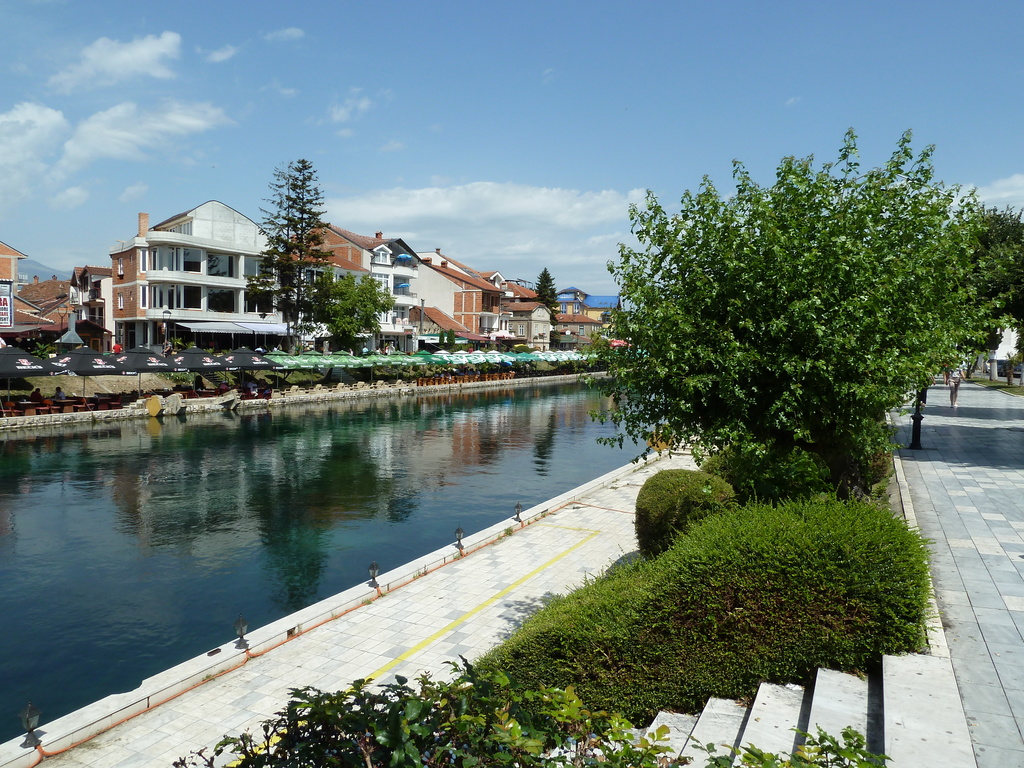 A mosque has been built close to a church. The building was not finished. We heard that the board ran out of money. The history is that in Macedonia Christians had to fight for their lives against Muslims since the IVthe century.

On the premises of the mosque we met an old man. When he saw us he jumped off his bike and talked to us in German. He had worked in Germany at the Bundesbahn. Now he has a pension out of that job.  He showed himself a proud man. Proud of what he had accomplished in his life and proud of visiting his Christian friends.

During our holiday, I kept thinking. Due to characteristics of myself and due to all what I saw in the streets of Struga. A lot of friendly people were eager in making contact with us. As the time passed by I more and more longed for making a photo from bosom-friends total differently dressed, apparently to be explained by their different back-grounds. But there was a paradox. When it is so natural in Macedonia to be friends in accepting the differences in styles of living, I would make it less natural when I gave that aspect my special attention.
Then on one of our nights in the centre I was lucky. We overtook seven youngsters. They were talking English and had apparently enthusiastic conversations. Somehow I felt I should address these girls. So I did. We had a spontaneous meeting in a square in the centre of Struga. It was my wonderful feeling to be trusted and to be understood. 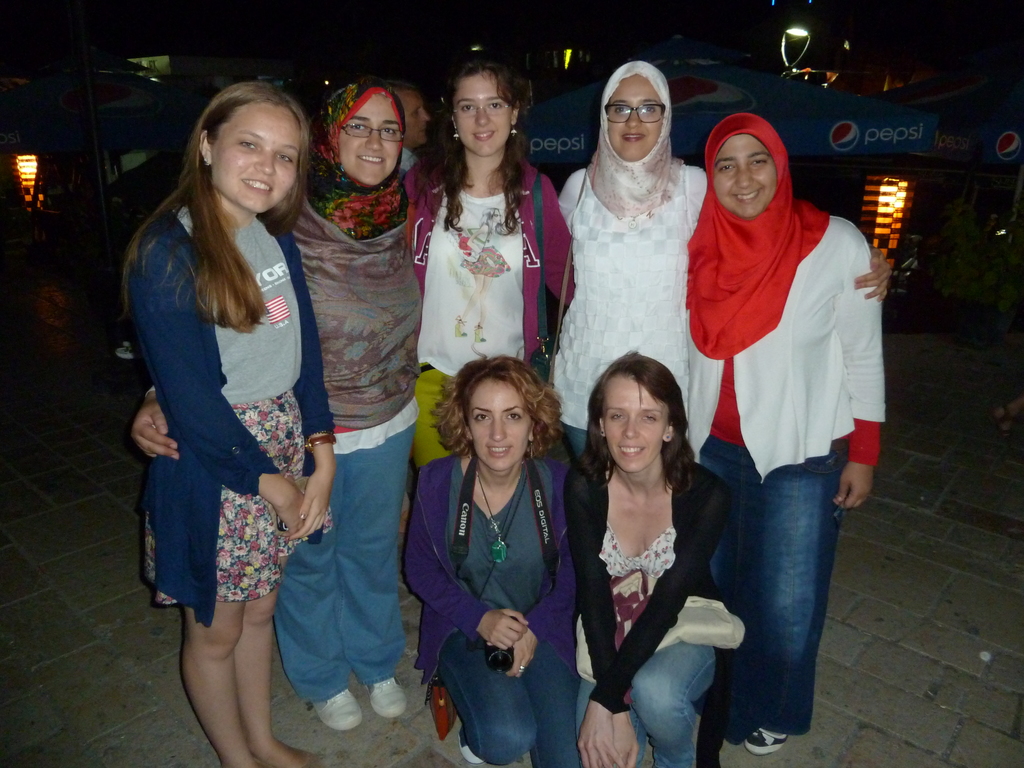 These ladies are from Hungaria, Armenia, Algeria, Russia, Turkey and Egypt. Somehow they gave me an energy.

The students in the photo above formed a non-political group and they met in Macedonia thanks to an American program implemented by a local non-governmental organization. They are students at the Preparing Global Leaders Institute, a summer leadership program, part of the Preparing Global Leaders Foundation series of international institutes. One of the paradigms of the professor for these youngsters, Dr. Sam Potolicchio, is to understand the culture and the religions in a country before a person can be a good leader in the first place.

I fully agree with this professor. I think, if it comes to leading countries, cultural and religious differences should not be subjects of democratic processes. Civil servants advisors of the government should have the knowledge. The democratic processes should focus on managing the understanding in society of cultural and religious differences. In my opinion, this part of the political debate should be society-related in the first place and not party-interest related.

Conclusion
Our 11 days holidays were too short. But the atmosphere we met with, in Macedonia, we always will keep in our hearts. Somehow, the world can do better. Understanding differences and making differences understood by the public is the first step to accepting differences in daily life in society. Governing is amongst others accepting the cultures in one’s country and convincing the people of the righteous of measurements to be taken in relation to living together. Macedonia is proving this at the moment in daily life and in making teaching new leaders in the world possible. Let’s take this as an example the rest of the world could follow.